Impacts of the Global Financial Crisis on Cities in Europe

An Introduction to Urban Austerity

For proponents and critics alike, austerity has become the new buzzword for describing the neoliberal crisis management designed and implemented despite heavy resistance in the form of mass protests in the aftermath of the 2008 global financial crisis. Politicians and decision-makers from many European countries and North America have introduced austerity measures to quickly reduce public debt, which increased enormously as a result of the global financial crisis and the gargantuan state-funded bank bailouts that followed. The vague promise of austerity, supported by dubious economic research (Herndon et al., 2014), represents a combination of state budget cuts, wage reduction, the privatization of public services, and further dismantling of the welfare state as a strategy that would, in turn, allow the private sector to rekindle growth and escape economic recession. Critical scholars have emphasized the negative consequences and economic failures of this recent turn towards extreme austerity measures. For Clarke and Newman (2012), the “alchemy of austerity” is based on two simple, but false, assumptions: (1) that the government budget deficits experienced today by many developed countries are unsustainable and (2) that fiscal consolidation measures are invariably expansionary, resulting in positive output and employment effects. Concerning the latter, Blyth (2013) and Whitfield (2014) have demonstrated that this flawed theory of growth-oriented fiscal consolidation has been empirically discredited on a massive scale as austerity policies “have fuelled the fire of recession in Europe and the [United States] rather than stimulating growth” (Whitfield, 2014: 6). Austerity has failed despite its promises: government debt has continued to increase and weak economic performance has prevailed in most countries due to reduced effective demand as a result of significant public expenditure cuts.

In addition to economic failure, the socioeconomic effects of austerity are catastrophic. Worldwide, austerity has led to increased unemployment rates, reduced wealth, increased social inequality, and increased cuts to wages, benefits, and pensions (for the housing situation in Greece and Spain, see Siatitsa, Chapter 10, Karagianni & Kapsali, Chapter 11, and Muñiz, Chapter 14, in this book). Austerity, as such, entails a “gigantic wealth transfer from taxpayers to the corporate sector and wealthy individuals” (Whitfield, 2014: 7). Based on the intellectual history of austerity since the seventeenth century and a comparison of different austerity policies since the Great Depression of the 1920s, Blyth (2013: 184) concludes that austerity is a dangerous idea as it “simply doesn’t work, no matter how many times you do it” and “relies on the poor paying for the mistakes of the rich” (ibid.: 10).1

Concerning the current situation, Blyth argues that the 2008 financial crisis has been transformed into a sovereign debt crisis by means of a concerted ideological offensive or “the greatest bait and switch in human history” (ibid.: 73). Fundamental misrepresentations of the facts and intensive ideological work have “turned the politics of debt into a morality play, one that has shifted the blame from the banks to the state. Austerity is the penance – the virtuous pain after the immoral party – except it’s not going to be a diet of pain that we shall all share. Few of us were invited to the party, but we are all being asked to pay the bill” (ibid.: 13). As the public debt level was declining on OECD-average before the crisis and only increased dramatically after 2008 (Stützle, 2013: 318), Blyth concludes that “any narrative that locates wasteful spending by governments prior to the crisis in 2007 as the cause of the crisis is more than just simply wrong; it is disingenuous and partisan” (Blyth, 2013: 47).

Due to this successful neoliberal re-narration of the crisis (Clarke & Newman, 2012; Peck, 2014; Schipper, 2014) and shifting of responsibility from creditors to debtors (Belina, 2013b; Tabb, 2014), states are now becoming, in the end, more amendable to creditors and the interests of financial institutions, while access to state power by certain social forces, such as trade unions, public housing advocates, and other welfare organizations, is delegitimized. As a result, “the costs, risks and burdens of economic failure” are redistributed “onto subordinate classes, social groups and branches of government” (Peck, 2014: 20).

From a scalar perspective on urban governance, Jamie Peck has argued that austerity measures frequently operate downwards as they dump risks, responsibilities, and deficits onto the local scale and function as “a new operational matrix for urban politics” (Peck, 2012: 632): “They offload social and environmental externalities on cities and communities, while at the same time enforcing unflinching fiscal restraint by way of extra local disciplines; they further incapacitate the state and the public sphere through the outsourcing, marketization and privatization of governmental services and social supports” (ibid.: 650). Since austerity operates as a “permanent fiscal tribunal” (Ibid.: 652), municipal governments have become both victims and instigators of new neoliberal restructuring. Within local state apparatuses, “the cadre of fiscal disciplinarians, restructuring advocates, change-managers, consulting auditors and local state entrepreneurs” (ibid.: 649) gain more strength, legitimacy, and power over those defending the interests of economically-marginalized citizens, welfare recipients, or public sector employees (see Besussi, Chapter 6 in this book). Despite its disastrous social impacts, urban austerity is often able to renew its own legitimacy as the highest priority of local state governments on the basis of a vicious circle of public spending cuts and declining state capacity to act. While municipal spending is being cut across all sectors, the ability and flexibility of cities to design policy and react to social problems is declining. The resulting lack of capacity to act delegitimizes state action; as a result, society’s willingness to enable local governments to take action by, for example, paying higher taxes, decreases (Streeck & Mertens, 2010). 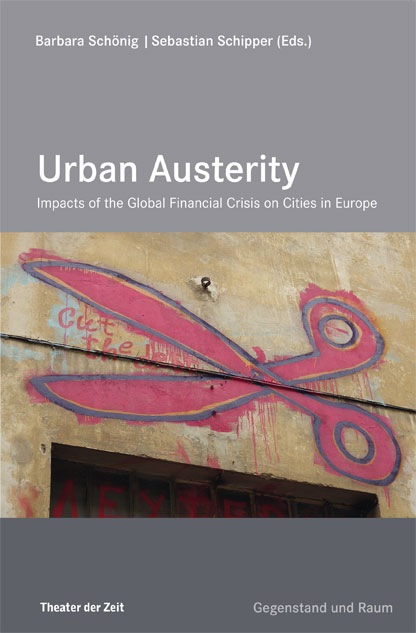